Venice is a tale of two cities, the tourist filled daytime city and the peaceful photographers paradise early in the morning whilst the rest of the city sleeps. Living in a city that is similarly photographed to death, it is hard to find new and interesting angles on Venice but as with Edinburgh you will be rewarded by exploring a little and following your nose. 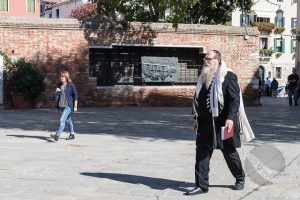 During the day the main tourist spots are San Marco, Accademia and Castello but there are some interesting photographic locations in north of the Island in the area called Canareggio (which means the Royal Canal). This was originally the area populated by Jewish immigrants, who were forced to stay in the area outside the hours of daylight until 1796 when Napoleon Bonaparte gave them the freedom to roam at all hours. The area is still known as the Venetian Ghetto and remains the home to many Jewish people. Take a walk along the quiet canals and you will find men in Hasidic dress wandering the plazas. Particularly head toward the Campo di Ghetto Nuovo where there is a moving set of plaques describing the Holocaust during WW2. 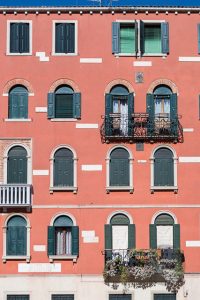 Venice is relatively compact and you can walk pretty much anywhere, indeed you have only two choices – there are no roads and bicycles are also forbidden. The other option for travel are water taxis which work throughout the day. You can buy a day ticket for €20 or 75 minute tickets for €7.50. At various places around the city you will see Traghetto, a kind of second class gondolas that gets you across the Grand Canal – use these as a cheap crossing to save some time and also as a way to get the snap of a gondolier in action without paying the €80 fee. Coming from the North of the island down to the more touristy areas, you can be bumped and bounced by  hordes of people visiting the city, often for less than 12 hours, or alternatively try heading down through the top of Castello toward Arsenale where you’ll find many more authentic views of Venice. 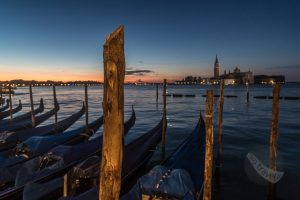 You will no doubt have seen many sunrise and sunset photographs of Venice but take care not to make the mistake of trying to point at the sun, I found that there are some great views at 90 degrees to the setting or rising sun due to the wide vistas you can see to the south of the island.

The best spot for the traditional shot of gondolas tied up in front of a Venetian church is just in front of the south wall of the Doges Palace. There are two spots here with room for six or seven gondolas and they don’t have the view spoiled by one of the more commercial looking Canal Bus stops. For sunsets you’ll need to arrive probably an hour before in the autumn to get yourself a good position as it is a draw for photographers. There are two ways that you can photograph the boats. First option is to try and get a shutter speed that will allow you to catch them fairly still, the low light of sunset means that you’ll be increasing the ISO to 6,400 to retain a shutter speed of 1/40th and a relatively good depth of field. Option two is to let the movement of the boats be captured like the second example. 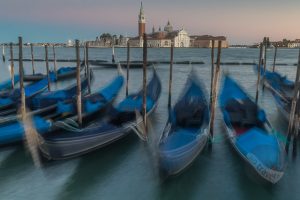 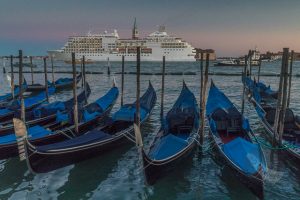 This is also a great place for sunrises too and has the added benefit that there are less people around to fight for prime position and also there is less traffic between the gondolas and the church. Whilst at the lagoon you’ll notice that this waterway is extremely busy. There is a mix of gondolas, canal buses and taxis, private speed boats, car ferries and most controversially, huge cruise ships bringing in hundreds of visitors in one go for their short trip into the city. The residents of Venice are protesting about these ships entering the lagoon and as a photographer, I can share their concerns, especially as one of the Cruise  liners timed its exit from the lagoon just as the sun was setting, therefore ruining the spectacular view for us snappers. 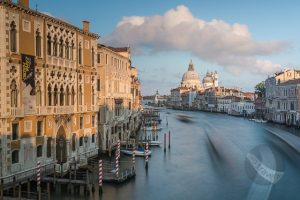 A second classic view for the start and end of the day is from the Accademia Bridge. The wooden structure provides a stable footing to look along the end of the Grand Canal as it enters the lagoon. There are some interesting effects to be had by tracing the path of the various vessels moving along the canal by setting a relatively long shutter speed, a 30-second exposure will get an effect like this one. 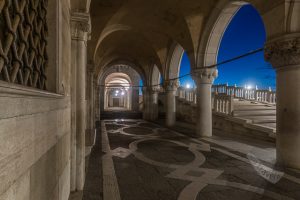 Around St Marks Square there are two locations that give you some nice hidden Venice shots that you don’t see in every guide book. The first is almost immediately behind the viewing point for the gondola shots and looks along the south wall of the Doges Palace featuring the ornate tiled floor. Try to get here for the blue hour before dawn and you’ll be rewarded with a space empty of tourists and more importantly a translucent blue sky peeking through the columns. 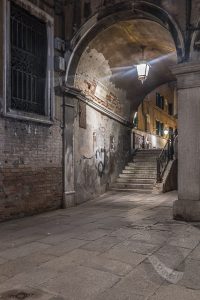 The other spot is on the East side of St Marks Square on the exit leading to Sotoportego del Cavalletto. There is an ornate light with a set of steps over one of the smaller canals. It’s relatively quiet in the evening and deserted before dawn.

St Marks is one of the ‘bucket list’ locations for a visit but for me the Square didn’t get me excited. The front of the Basilica is currently covered in scaffolding and a tarpaulin as is one of the walls of arches on the west side of the square which ruins the shot along the square. The other problematic thing in the square is the floodlighting which points down and toward where you will be stood to photograph the Basilica and Campanille so be prepared for lens flare. To me this is a location that is best remembered with the eye than the camera sensor. 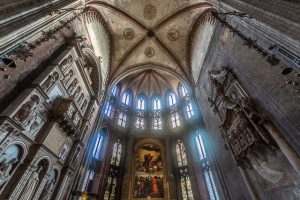 So far, the photo locations have been outdoors, yet Venice, particularly is known for its impressive frescos and tombs inside the churches. This is where a photographer is going to have issues, many churches do not allow photography inside the churches, despite the impressive paintings being damaged by streams of direct sunlight hitting them through the windows (very few of the churches in Venice have stained glass). Those that do allow photography will not allow tripods even when there are wide spaces that make tripping over them an impossibility. A particularly amusing event happened when I was trying to photograph the tomb of the artist Canova in Santa Maria Gloriosa dei Frari when I was informed that I couldn’t use a tripod. After protesting to the woman, I was told that if I wanted to take photos with a tripod that I would need to ask ‘the boss’ of all churches in Venice. I’m not sure if this is an actual person or if I needed to seek divine intervention so future visitors may consider closing their eyes briefly and looking to the skies before exclaiming, “yes, the boss says it is OK”.

For a photographer, Venice is both a treat and a curse. There are undoubtedly many great shots to be had but even in early October when we were there the streets are packed for most of the day and it is frustrating to get around or get a clear shot without someone ploughing through your photograph. 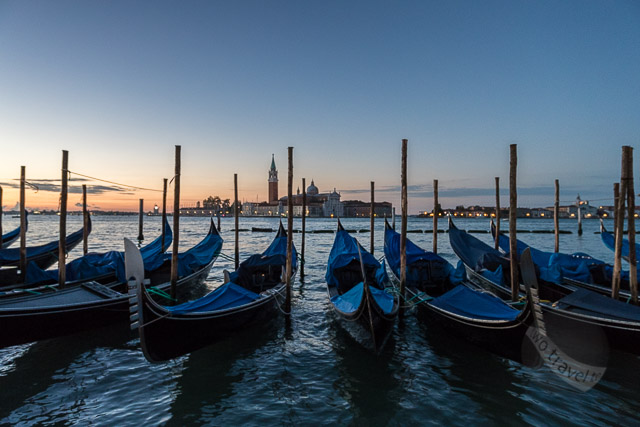