We arrived to another warm Croatian welcome in Slunj by Airbnb host Zlatko of Lucic Apartments. This time there was grappa but also a delicious hazelnut liqueur and again whisky in return. In his early thirties, Zlatko had studied tourism and hospitality and now worked as an accountant and rented out an apartment below his parents. We had a really good blether with him. We learned how he had left the area, aged seven, to make a seven day long trip to Zagreb with his mother while the men had to make a more dangerous four day trip as they weren’t allowed to take the same route, with families not knowing if they would be reunited again. He said the area, Slunj and Rastoke, was an important strategic area near to the Bosnian border hence why it had been invaded. Four and a half years later families returned to find everything had been devastated. Now there are still abandoned houses. Sadly one of the phrases we introduced to Zlatko was ‘brain drain’. On a lighter note, he was delighted with Richard’s use of ‘as the crow flies’ in response to the Croatian term meaning ‘air height’. On day 2 there was a supply of waterproofs outside the front door and on our last night Zlatko delivered a plate of black grapes, with an almost plummy flavour.

The area is ideal for visiting Plitvice Lakes National Park (Plitvicka Jezera) which is about 35-40 minutes away. The flat itself was immaculate and very comfortable.  The Lakes are a Unesco recognised place of natural beauty, and it’s hard to believe that they were home to the ‘Plitvice Bloody Easter’ at the start of Croatia’s war for independence where each side both suffered one casualty, Croatian Josip Jovic and Croatian Serb Rajko Vukadinovic. 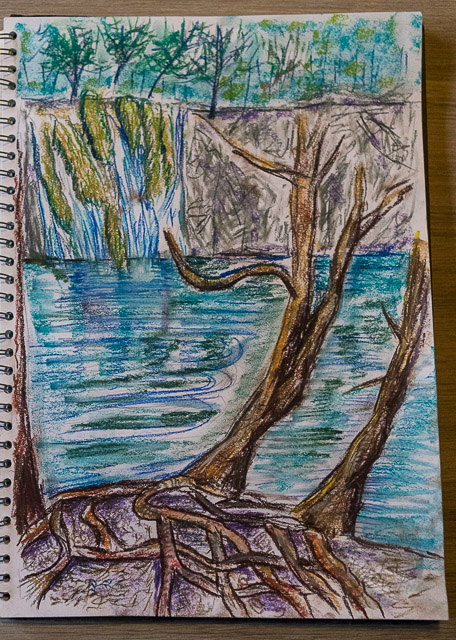 At the park, we took the recommended route of starting at Ulaz (entrance) 1 and going from the Lower to Upper Lakes. This is definitely a high impact route, starting with the Velika Slap (big waterfall) and soon passing through the aquamarine, clear waters of the lake surrounded by limestone cliffs covered in red shrubs and autumnal plants and trees. The lake is full of fish of every size and some ducks. I was hoping for a glimpse of a wolf or wild boar (not the bear that is the park logo) but here Rich played Sancho to my Quixote explaining they were only in the wider park area. 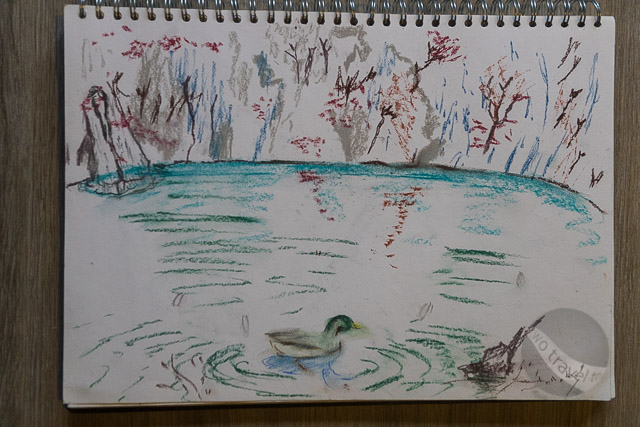 There is a policy of leaving trees to fall and many ghostly, submerged trees are visible on a bright day. Walking is mainly on special wooden trails right through the lakes and over the smaller falls – you are completely immersed in the landscape. Leaves were falling all the time, especially on our second day. When the sun shone the colours were even more captivating. In spite of the coach loads of tourists, a day here was restorative and peaceful. Electric boats and a bus (called a train) connect the upper and lower lakes. Apart from one spot at Galovacki Buk I found it difficult to sketch on the narrow bouncing walkways, especially when tourists tried to take selfies with me and the sketchpad :-\.  But at these falls there was a tiny bit of lake shore to put feet on and rest a while. In the end, I did my only more worked up sketch from memory and a photo. 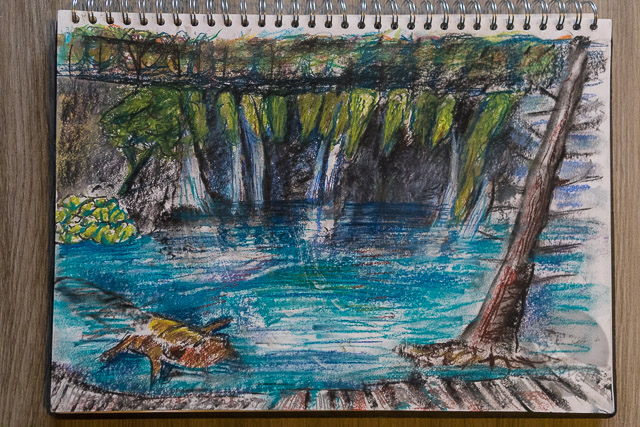 We visited again on the second day when unfortunately it was cloudy and drizzly. It was still great to watch the mist and rainfall on the lakes but I was glad to have had the first dry day that we did, particularly because of the striking colour combinations. The bad weather seemed to fuel Rich’s creativity a bit, making him determined to get some good shots.

Parking – It costs 7 Croatian Kuna per hour to park.

Eating – Take a packed lunch unless you like burgers. Small local supermarkets have long opening hours apart from a half day only on Sunday.

Clothing – Most people were dressed normally, with flat shoes but there is little in the way of shelter if it rains once you get there. Waterproofs and comfortable or shoes are a good idea.

Family friendly and accessibility perspective – There were some small children there, but mainly babies being carried or kids old enough to stay safe on the walkways. The majority of the park would, unfortunately, be unnavigable for people who use wheelchairs or walking aids.

Eating Out
We ate in the watermill village of Rastoke at the delightful Pod Rastockim Krovom (www.slunj-rastoke.com) where I had creamy mushroom soup and polenta with my grilled vegetables and Rich had freshly caught river trout with the Balkan specialty of potatoes with chard.