On arriving in Zagreb we were collected from the bus station by our Airbnb host, the friendly and relaxed Barbara. A busy mum of three and wife of documentary filmmaker Boris Mitic, she greeted us with a warm welcome fuelled by small glasses of pear rakija (like grappa), to which we offered a Jura (of course) whisky in return. We were also invited out to a concert that night but sadly the sunrise starts and travelling had caught up with us. 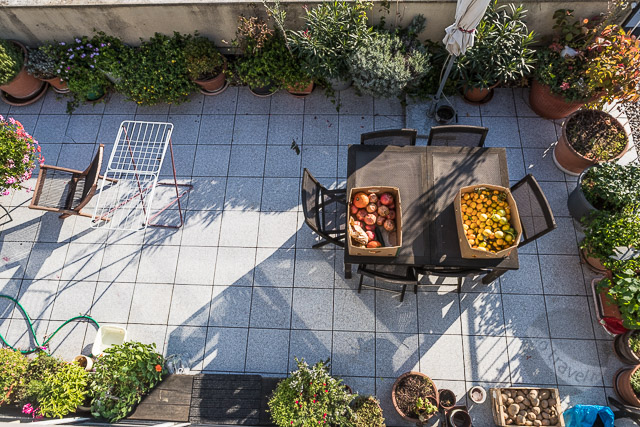 The top floor flat we were renting had been her home for many years since the 1970s, had most recently been used by her husband as a work space, and her parents live in the apartment below. The outdoor seating space was the same size as the flat again and had a fab view over the Zagreb skyline, including to one of the nearby skyscrapers approved in the 2000s. HOTO Towers now lies empty after being sold by the previous owners the telecom company. We could also see the gothic spires of the cathedral on Kaptol. Barbara said she still hadn’t tired of the view and I could see why. We shared it during our stay with a miniature Don Quixote and Sancho Panzo, who were perched outside gazing at the skyline, just two of the quirky features in the apartment. I did spend a little time sketching it but just didn’t have time to grapple with the complexities of scale and depth, not helped by our very human tendency to look around 180 degrees and to ‘zoom in’ and out of details that interest the most. 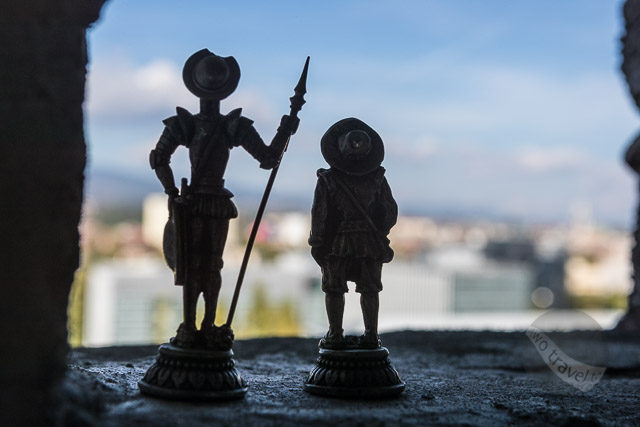 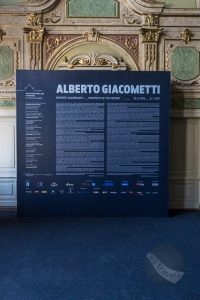 Zagreb is full of museums and galleries including the fairly new but well known Museum of Broken Relationships. Once I saw the posters for a temporary exhibition of Giacometti’s work this became a priority to see. The Art Pavilion in Zagreb (www.umjetnicki-pavilion.hr) is apparently the oldest purpose-built gallery in southeast Europe and started life as a temporary pavilion for an exhibition of Croatian-Slavonian artists in Budapest in 1896 before its iron structure was shipped back to Zagreb.

The exhibition was just over twenty drawings by Alberto Giacometti (1901-1966, born and died Switzerland), on loan from the French Foundation Maeght, a Man Walking (1960) sculpture and nine Women of Venice (1956) sculptures. The exhibition walls and plinths were black, and even the gallery assistants were dressed, almost swathed, in black outfits. This made for a very immersive experience, with the haunted fragile figures dramatically lit. Hat off to curator Jashminka Poklecki Stosic who curated the show for the Pavilion.

The sculptures were all displayed on one long plinth running almost the entire length of the exhibition space, with drawings on one side. Richard was quick to notice Giacometti’s sculptural drawing style, saying it looked to him like how CAD drawings would render a subject. It’s hard to forget the hollow sunken eyes in a Giacometti self-portrait.

The other wall featured four video installations by Croatian photographer and cameraman Zoran Marinovic about current war zones in Asia and Africa. One set of footage is of the refugee camp at Idomeni in Greece. The camp has appalling conditions and has been home to refugees from Syria, Afghanistan and Pakistan waiting to cross into Macedonia and ultimately get to Germany and Sweden. Since May this year Greek authorities have been relocating people to Thessaloniki facilities instead. Alongside this film was one of Isis smashing buildings and sculptures.

Giacometti made his sculptures in the aftermath of the Second World War. Being in neutral Switzerland it was living in Paris in 1946 where he really encountered the psychological and physical damage caused by war. His sculptures are abstracted to the extent that feet seem strongly rooted, perhaps immobilised, while human bodies are stretched almost impossibly thin, emancipated and precarious. Seeing Giacometti’s powerful and moving expression of ‘man’s inhumanity to man’ against a backdrop of world events today was a sobering experience but demonstrates the continuing power of the image, both documentary and artistic.

Coincidentally we were in Zagreb on their Independence Day (8 October), a national holiday since 2001, their tenth anniversary of independence. Only a small crowd seemed to have come out for the small parade of horse-mounted guards and one man we spoke to seemed a bit cynical about the holiday. I wondered if maybe that was a good sign, that people might simply be too busy enjoying a day off to come into the city centre.

We ate in a city centre Istrian-style restaurant where as well as the by-now-ubiquitous grilled vegetables I had a delicious risotto-style dish of corn, chickpeas, lentils and peas. We also found time to sample the light, medium and dark beers in a local micro brewery and eat chargrilled sweetcorn from a takeaway stall.