The marketing slogan for Slovenia is ‘I feel Slovenia’ and I don’t think I’ve ever met as friendly and polite people when on holiday or travelling as we did in Ljubljana and around Lake Bled in Slovenia. Ljubljana was intended as a pit-stop but I would definitely like to return here and also see the lakes and Triglav national park in more detail. Full of Secessionist (art nouveau) buildings in the main squares, constructed largely after an 1895 earthquake, Ljubljana felt very switched on culturally. Instead of going to the permanent collections we checked out a free temporary exhibition in the City Art Gallery of Slovenian artists born in the 1970s. Titled ‘Better doggy style than no style (painting after the end of painting)’ the pieces explored ideas about the impact of technology on language, perception, experience and relationships, often through a form of painted concrete poetry, and unsurprisingly given the title, with a lot of humour. To get into much of the exhibition it was necessary to go through a closed door in a medical style waiting room. This perhaps challenged the perception that only specialists can access contemporary art, or simply indicated an opening of the mind by opening the seemingly locked door. 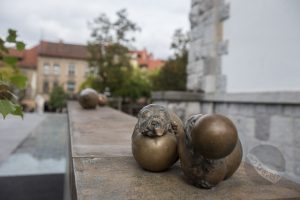 We were back in Ljubljana briefly after a few days at Bled and strolled around the bridges. Sculptor Jakov Brdar made a lot of the sculptures including the cheeky little creatures on the stone balustrade. We realised later that an interesting looking and elegantly dressed bearded man we’d seen while buying roasted chestnuts was the sculptor himself. We had lunch in the Lockar bar near the Butcher’s Bridge where you can buy a ‘love lock’ to engrave and attach to the bridge. Many are being cut off because of the weight but the city seems to have embraced the trend otherwise, lighting up the locks at night. We saw a young woman on her own except for a toy dragon (the next bridge along is the Dragon Bridge) attaching a lock. I did wonder what her story was.

I’m reluctant to compare one country to another but Slovenia does feel like Austria. Think fresh air, aquamarine, clear water, conifers beyond counting and snowy jagged peaks. After time in two cities it was grand slowing down in Bled and watching the effects of weather and light on the lake and Bled Island. 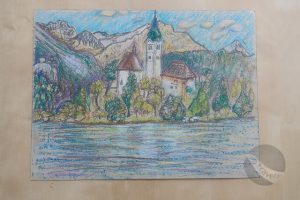 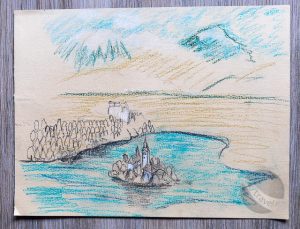 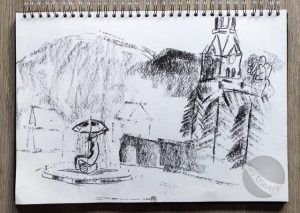 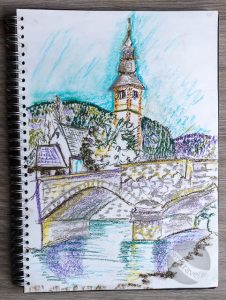 Lake Bohinj was equally beautiful and just a short car trip away from Bled. There was time for a 3 minute sketch of a roundabout sculpture on the way and a longer sketch of St John the Baptist’s church at the edge of Bohinj.

The area is supposedly prone to rain but this sculpture was the closest we got to bad weather. At the church we met a father and son who were also out taking photographs. Through his son, we heard the older man had grown up in the village and attended the church for many years as a child. He had also been taking photographs for sixty years.

At Bled, the climb up the 670m hill Mala Osojnica with camera and sketching gear was worth it for the view down showing the whole shape and colour of the lake but it was chilly enough that I only sketched for 5 minutes. The walk is described as simple and not steep from which I would conclude that Slovenes are a fit and hardy bunch, or that the comparison is with the nearby Julian Alps!

We took the large traditional rowing boat over to the island with Matjaz, who had been working the pletna for three years, having taken it over from his father who he said had done it for fifty years. It was quieter getting on at Camping Bled than at Villa Bled and we shared the boat with just one Korean woman. Matjaz also showed us a photo of a friend with a 2 metre long fish purportedly caught in the lake. It looked real enough but I wasn’t sure if he was winding us up. 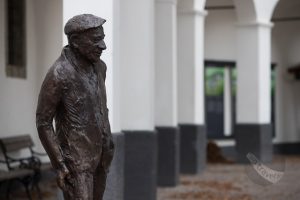 On the way from Bled back to Ljubljana we stopped in a quiet hill town village of Radovljica and had a quick look at the World War Two Nazi bunker converted to a chapel dedicated to Jewish nun Edith Stein, who was executed at Auschwitz. A recent addition to the town is a sculpture of an art historian, Cene Avguštin, by Tatjana Kostanjevic. Avguštin researched the development of this town – and others – from mediaeval times and depicted six key stages in a set of pastel and pencil drawings. I can’t think of a single other statue of an art historian!

We stayed in Vila Marjetica (also listed on AirBnB) which guidebooks describe as being out of town but that’s a slight exaggeration. It was a beautiful apartment with views to the Julian alps, a piano, a small bath and a balcony. There is a bakery and supermarket nearby and also the Gostilna Union restaurant in short walking distance.

Along with grilled vegetables, I tried a traditional Slovenian pastry main course filled with cream cheese at the gostilna.

In the quiet hill-top town of Radovljica, home to the beekeeping museum, we bought some small jars of Slovenian honey and tried the kremna rezina cream and vanilla custard cake.

Travelling between Venice and Ljubljana

We travelled from Venice to Trieste by train then bus got us the remainder of the way. Doing the whole trip by bus is probably better at present as the tram in Villa Opicine isn’t running at present that is key to connecting between Italy and Slovenia. We were delayed by 90 minutes on the train too, and at one point wondered if Trieste would be our stopover.