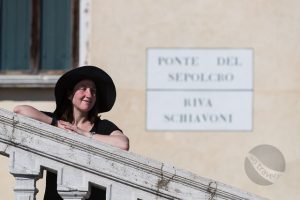 Our three-week grand detour around the Adriatic coast and Balkan interior, to Italy then to four of the six countries that were formerly part of Yugoslavia, started in Venezia and would end in Dubrovnik. The two places have a shared history, with Venice controlling the important south-north trade route through Ragusa (Dubrovnik) for many centuries. One of the main seafront streets in Venice is called ‘Schiavoni’, a reference to Dalmatia and Istria in what is now modern-day Croatia. 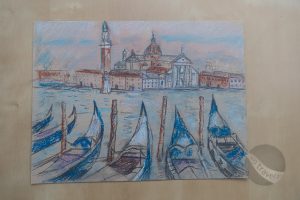 Just along from this street, outside the Ducal Palazzo (Doge Palace) is a view back to the Palace and Bridge of Sighs captured by artist John Singer Sargent among others, facing the opposite way to where today’s photographers go to capture the sunrise over the San Giorgio Maggiore church. While his view had gondolas in the foreground, nowadays there are small barges unloading supplies at sunrise and nearby sweepers cleaning the streets with traditional brooms. I couldn’t help wondering if Sargent faced this way rather than compete with fellow artists looking out over the water. I decided to attempt the Giorgio Maggiore view myself but at sunset. The advantage of this time of day is being able to make out some of the architectural detail before having a go at capturing the soft blues and pinks which the likes of Turner have conveyed so masterfully over the years. 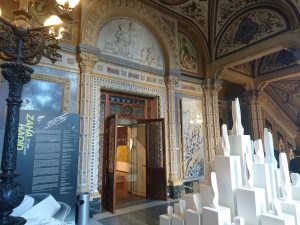 Venice is renowned for church paintings by the likes of Bellini and Tintoretto, who lived in the Canareggio area where we stayed, but as a lover of contemporary art and architecture, my last trip here was during an art biennale and included a visit to the original Guggenheim museum, Peggy Guggenheim’s former home and collection located just across the Accademia bridge in the Dorsudoro area. This year it was the architecture biennale and a highlight was the retrospective of Zaha Hadid’s work in the ornate Palazzo Franchetti beside the Accademia. It included a model of Glasgow’s Riverside museum and an interesting display showing her exploration of potential tower shapes.
This usually phallic symbol was rendered flowerlike and organic by her various forms and the display captured her commitment to experimenting with form. I had a go at sketching the Palazzo and the Salute church from the Accademia. Although I don’t think Turner’s interpretations of the Salute can ever be bettered, I can see why people are still drawn to it as a subject. Artist Adrian Tuchel, whose work we stumbled across in a large boat shed converted to a gallery, tackles the complexity of the ornate baroque 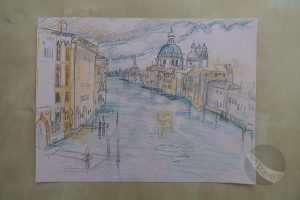 architecture with seemingly loose ink drawings and strong colour washes on long scrolls. I say seemingly because he has likely spent years mastering the skylines and buildings to be able to produce these characterful and recognisable works.

Travelling to and around Venice
From Milan Malpensa airport, it was just under an hour to Milano Centralo then 2 hours 10 mins on the Trenitalia to Venice. (There isn’t much to eat or drink on these trains and first class equates to one small glass of prosecco so it’s worth taking your own supplies if travelling further).
The Santa Lucia station in Venice is walkably close to the Canareggio sestiere (area) we were staying in.
For a cheap 2 Euro gondola experience, get a traghetto such as the short gondola crossing to Dorsudoro. That said, the 80 EUR proper gondola ride is probably worth it given the time that seems to go into becoming a gondolier, with licences passed down in families. 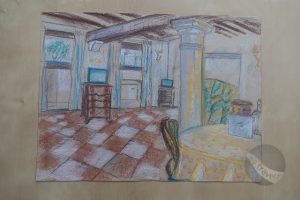 Our AirBnB flat was luxurious and cost the same as a basic hotel would do. Our host Sybille gave us a warm welcome to a beautiful apartment that could have doubled as the setting for a Veneer painting with beautiful tiled floors, beam ceilings with a supporting column and Queen Anne style furniture. The flat was also well stocked with supplies. The Canareggio area, the largest residential area in the Venice island, was home to Venetian artist Tintoretto and there are some of his paintings in the very picturesque Church of Madonna Dell’Orto. 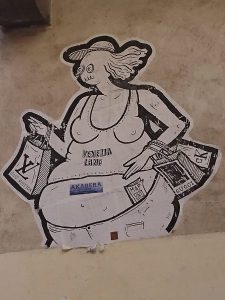 Italy was where street art was invented, with graffiti being ‘the word on the street’ and there is a lot of tagging, but we also saw an interesting street art caricature satirising the in-out snapshot-seeking shopping tourist that is the focal point of some local protests against large cruise ships and daytrippers. Although tourists are a mainstay of the Venetian economy it is easy to see what issues are posed by the huge crowds who descend for a few hours only.

Vegetarian Eating
I lived on spaghetti and pesto on a previous trip to Venice and it was much the same this time. The advantage of AirBnB was being able to cook a delicious ratatouille ‘at home’ one evening. It is also expensive to eat and drink even away from the San Marco Piazza.