Don’t believe the headline. Our two perspectives haven’t caused a split, instead we have arrived at our next location of Split and the nearby town of Trogir, which we visited on the second day. Both are UNESCO sites and both have oodles of history if you like that kind of thing.

The area around Split is sprawling with residential areas stretching from the coast all the way up to the mountains that you will have to skirt around as you drive into the city. However, the old town of Split is a relatively small area surrounded on by the ancient city walls dating back to 4AD when the emperor, Diocletian, decided he would build a little holiday home for himself by the coast for his retirement. Despite it being a historic monument it is also a working area with shops and apartments enclosed in the walls. You can enter through one of four gates, Gold, Silver, Bronze and Iron. The silver entrance is a little underwhelming with souvenir stalls lining the streets as you enter. For a grand entrance, head to the bronze gate before in the morning it gets busy and you will get a clear shot of the basement entry, go as wide as you can to take in the fantastic stone walls. 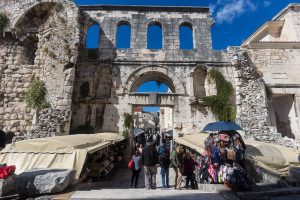 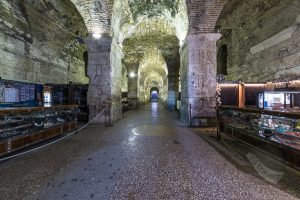 At the top of the staircase leading from the bronze gate, you will find ‘roman soldiers’ loitering in the Peristyle square who will happily pose for photos for you in return for a few Kuna. I think this shot and a few others cost me about £1, it would be great though if you don’t offer to send your photos to them for free as you will undoubtedly be asked. Remember, some of us photographers do this for a job. 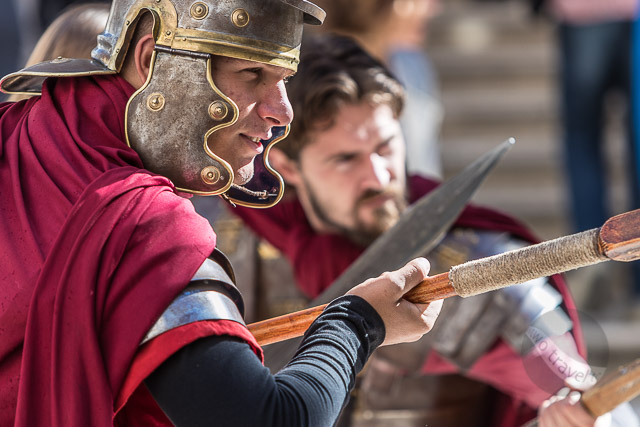 Going up another set of stairs from the Peristyle there is a spectacular domed entry vestibule to the Palace which has an open top allowing you to see the steeple of the cathedral. This is another one that is worth investing in the widest lens possible. I was glad to have taken the Canon 11-24mm for this shot. 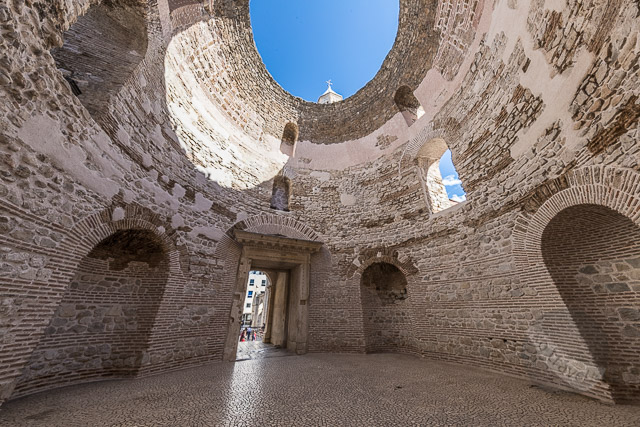 As with all the winding street places we have visited in Croatia, keep a look-out for small details of the city. This street sign is just above head height leaving the Peristyle heading toward the iron gate and the decorative lamp really adds to the shot. 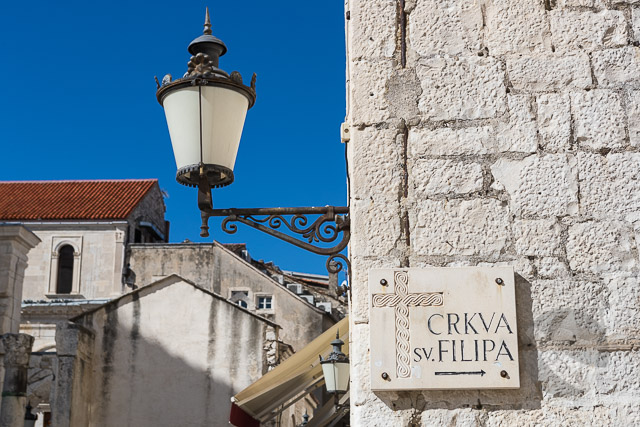 Leaving the walled city head up a small street called Sperun to the right of the Samostan St. Frane church and then continue up the steep street called Senjska. As you climb higher you start to leave the tourist shops and start to see the ‘real’ split of people living their normal lives and you can get some great views looking both up and down the street.

At the top of Senjska is a bar with probably the best view of any in Split. In fact, there are two great views from Vidilica, the first is the spectacular panorama of the city where you get the true perspective of how widespread the Split region is and the second one is the bottom of the well-deserved beer that you should have for climbing so far above the city. 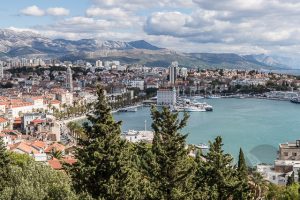 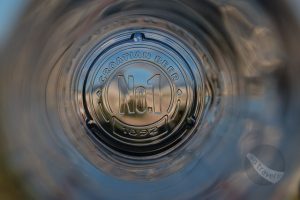 Unfortunately, the walking isn’t finished but if you continue you will get a few more photo opportunities. About 500m from the terrace bar is the Church of St Nicholas which has a very simple design. Try to get there early afternoon where you will be rewarded with the sun lighting up the white walls. 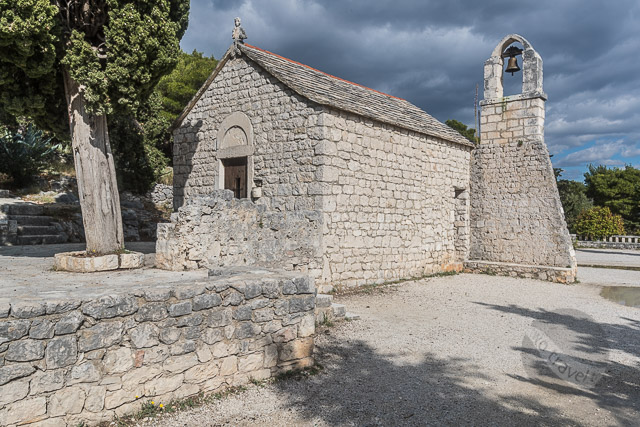 Another 20 minutes along the path and you will have a choice of taking a path to the right or continuing along the cliff top path. Take the right path and eventually, you will come to a set of 378 steps that lead up to the top of the Marjan hill. At the top, there is a viewing platform which overlooks the entire city as well as a cross erected in 2013. 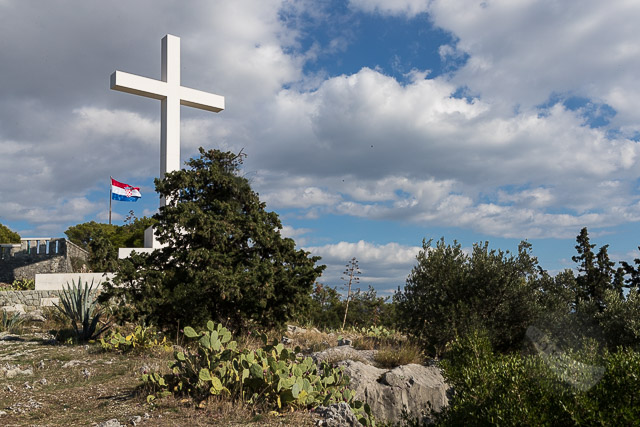 Heading back down the hill steps, we came across this little guy who was sunbathing on the warm white steps and seemed quite content to pose for photos until a few heavy-footed tourists stomped past whilst I was prone on the floor snapping him. 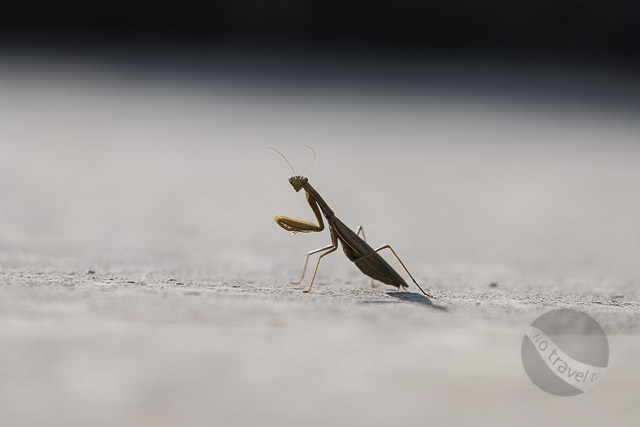 Leaving Split we had a few hours to spare and so on the recommendation of one of the traders at the Bronze gate we headed to Trogir which is a 30-minute drive from Split. This is a much smaller medieval city, built by the Venetians. You can get a reasonable view of the city from the Kamerlengo Fortress but the entry fee really isn’t worth what is inside – a walkway around the buttress and a rickety staircase taking you to the tower.

Probably the most interesting place was the Church of St Dominic which is also a monastery for female Benedictine nuns. The small cloisters (available after the payment of a small fee) make a nice subject especially if the garden is in bloom. Surrounding the walls of the cloisters are relics dating back to Roman times. 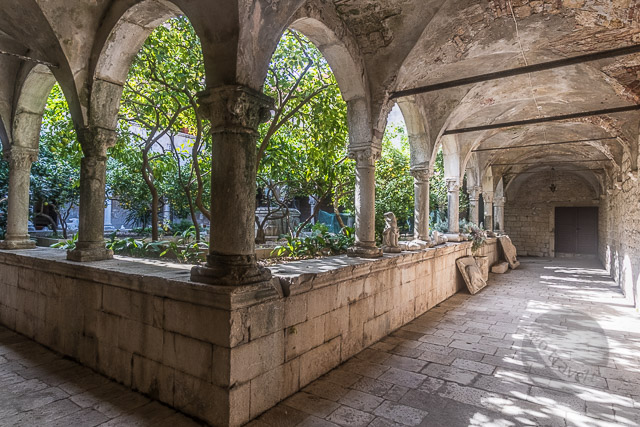 Before you leave Trogir, head to the main square where you can get some nice detail shots and on the way you may even bump into this friendly artist who was happy to pose for photographs. 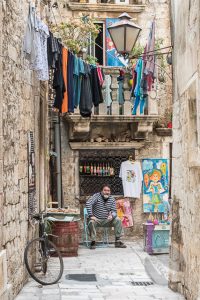 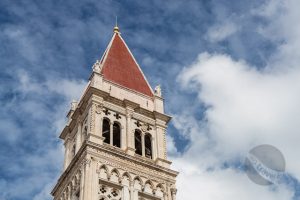 As many tourists do, you can probably see all of Split and Trogir in a day but take your time and spread your visit over two (shortish) days and you’ll come away with a nice set of snaps.

I really liked the street called Senjska in Split. Spend an hour or so just watching people go up and down the steps and enjoy the view on day to day life hidden from most tourists. 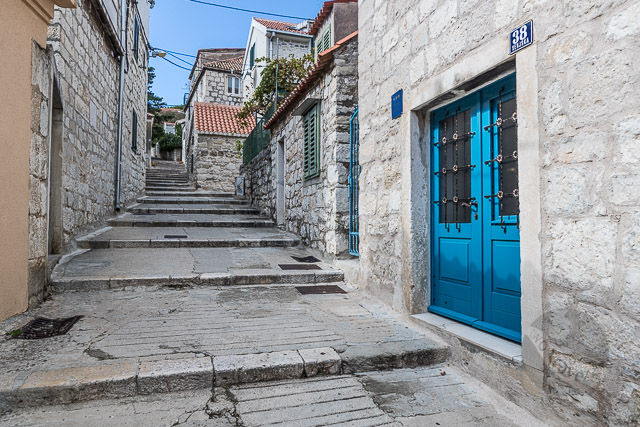