We arrived in Mostar from Split, coming into the country’s second largest city, and cultural capital of Herzegovina, via a twisting road that slowly descended and turned into the town, having followed the sat nav’s out of date maps over the newer road signs in an area where a new motorway is still under construction. Arriving this way gave us a strong sense of the river canyon setting of Mostar. The famous green Neretva River runs through Mostar and under the Stari Most bridge that gives Mostar its name meaning ‘bridge keeper’. 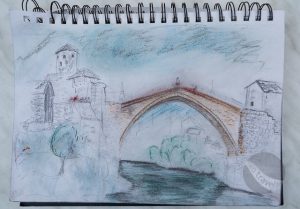 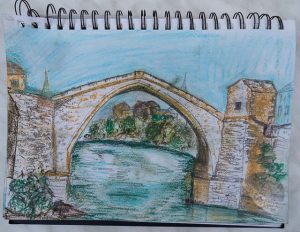 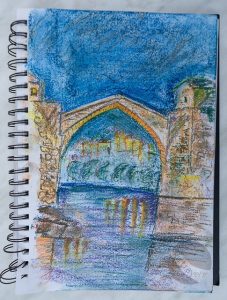 This old bridge is actually a ‘new old bridge’ as the 427-year-old original Ottoman bridge was destroyed by shelling in November 1993 during the siege of Mostar in the war that followed ex-Yugoslavia. Croat forces later admitted to deliberately targeting the ancient bridge. Its reconstruction was funded by the World Bank, UNESCO, Aga Khan Trust for Culture, World Monuments Fund, Council of Europe Development Bank and the Bosnian, Italian, Dutch, Croatian and Turkish governments. During reconstruction, divers worked on recovering stones from the river. One of them sadly lost his life doing so and was honoured with burial in the park that became a small war cemetery, close to the old town. Our AirBnB host explained it was not normal to have burial places in the centre of towns but that there had been no other choice during the siege. 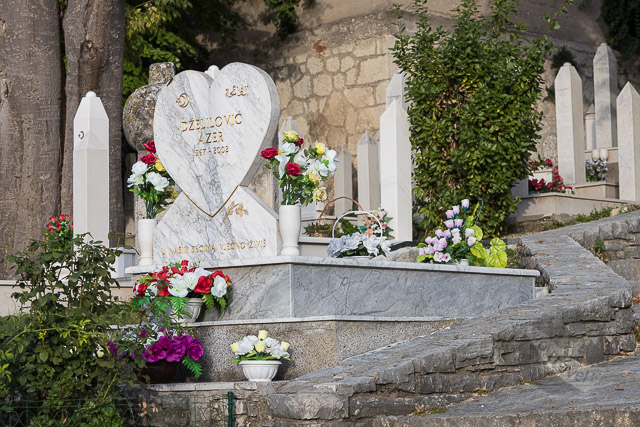 The bridge reopened on 23 July 2004. Walking on the bridge still gives you a sense of its ancientness as you clamber over it but from the nearby auditorium viewing point you see how the new stone has still to weather. The bridge is also famous for a summer diving competition into the river below. Unfortunately, we didn’t see any divers or jumpers as none of the tourists seemed willing to pay the quoted going rate of 30EUR.

17th-century traveller Evliya Celebi described the arch of the bridge as resembling that of a rainbow and in the flat there was a beautiful book of paintings, drawings and poetry about the bridge, often reflecting on it as a symbol of where Islam and Christianity meet. One of my favourite drawings was an abstract view of the bridge with a symbol of a handshake in the middle. Minarets and a large Christian cross on the hill are the focal points of the Mostar old city skyline.

While this symbolic bridge has been rebuilt and the old city restored, elsewhere in Mostar many buildings still stand destroyed and empty, often with similar new-looking buildings alongside. Later on a day trip to Sarajevo, we saw a video installation by an artist who had been trying for ten years to get her flat in the city back, so far unsuccessfully. We heard in Mostar that it could take even longer than this to get properties back if they were on ‘the other side’ of where you were supposed to live. Until we visited BiH I had no idea there was this legal and bureaucratic barrier to getting on with life twenty years after the war. The bank that became a snipers tower still looms behind rebuilt urban and play areas but up close you see how it has been reclaimed by street artists, with many uplifting statements about humanity and equality.

We did a day trip to Sarajevo with our hosts, following the beautiful Neretva river most of the way, including past the town of Jablanica, the site of a Second World War battle in 1943 where a rail bridge was blown up while a train was crossing. Later The Battle of Neretva film starring Yul Brynner and Orson Welles was made there. Picasso designed the English language film poster, similar in style to his Guernica painting, apparently in return for a case of local wine, which seems a fair deal to me!

In Sarajevo, we wandered around both the old town and some of the main shopping streets. The old town still features a lot of traditional crafts including the famous coppersmith’s lane where yes, we bought a hammered copper coffee pot, our only holiday souvenir so far. I also got tips on making Bosnian coffee from our hosts. We did a self-guided walking tour past locations such as the street where Franz Ferdinand was assassinated, the Sarajevo rose, eternal flame and the poignant glass memorial to children who died in the war. Unfortunately, the City Hall exhibition was closed but we popped into the National Gallery, where only a fraction of the permanent collection seems to be on display. Five years ago it was fighting for government funding and the current position still seems unresolved. The current temporary exhibition was free the day we visited, to mark the gallery’s seventieth anniversary. Paintings in the permanent collection of artist studios, interiors, and gardens, our home havens, take on a new meaning through the presence of two contemporary artworks, the aforementioned, and another about life as an artist in Sarajevo during its siege. Among paints and inspiration and reference materials were vacuum sealed foil wrapped food parcels, mainly of shortbread and cookies.

Outside the Academy of Fine Arts a newer footbridge over the Miljacka river caught our attention. Rich immediately likened it to a Scalextrix racing loop. The motto of the bridge was ‘Festina Lente’, meaning ‘more haste, less speed’. It opened in 2012 to a design by Academy students Adnan Alagic, Amila Hrustic and Bojana Kanlic. I liked the contrast of the plasticky blackness with the academy behind it. 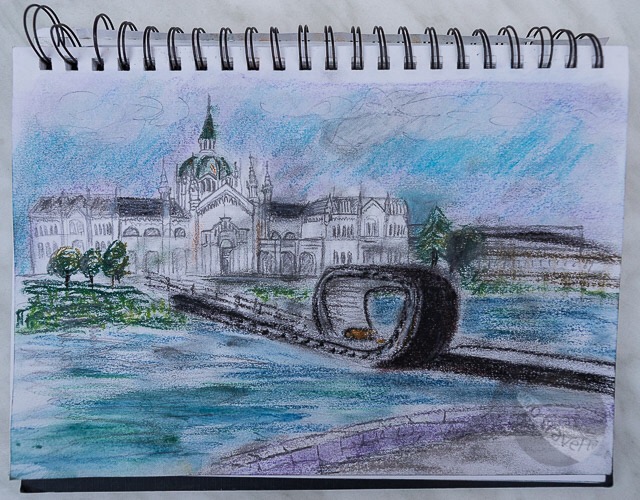 It is just over a 2 hour drive from Mostar to Sarajevo on great if sometimes high roads but it was great to take a break from driving and enjoy the scenery. And nothing beats local insights into a place. We learned more from our hosts and guides than we could from any guidebook.

We did a short detour to Blagaj near Mostar on our way to Kotor in Montenegro. There are several restaurants on the river and lots of stalls selling local produce, mainly food, but the highlight is the spring of the Buna river, where Muslim dervish (monks) built a tekija (monastery). The house is at the foot of limestone hills, with a wooden ladder leading to an upper cave. Short dinghy trips are possible to the lower cave. There is also a fort at the top of the hill in Blagaj. For us, it was a peaceful spot to hang out before a 4-hour drive to our next stop. 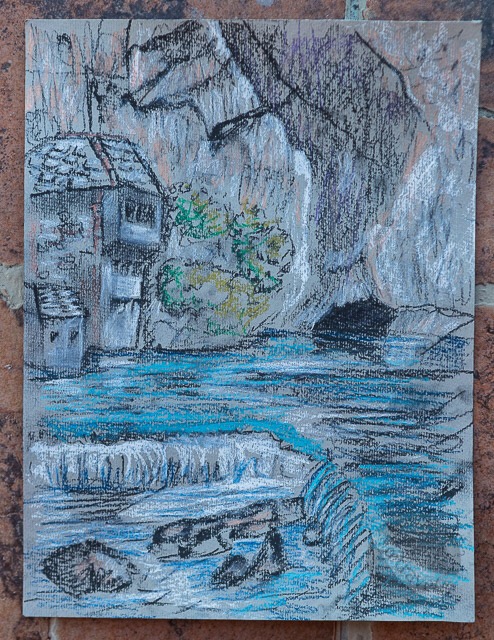 Where we stayed – We stayed just minutes from the Mostar old town in a spacious and modern flat. Our hosts were great and the welcome lemon cake and morning pita pastries were delicious. The flat can be booked via AirBnB or Booking.com.

Eating out – portions were huge and reasonably priced in the old town. It’s worth saying you are vegetarian even if no meat is listed on the menu description, as that’s the only way to ensure you don’t get served meat in Mostar or Sarajevo!