Our final destination for our three-week tour around the Balkans and Adriatic takes us to Dubrovnik. The history of this city could be told as a tale of real-life earthquakes, lightning strikes and battles, yet it would appear that the experience of Dubrovnik today is mainly through the fictional writings of Game of Thrones creator George R.R. Martin, peppered with a smattering of George Lucas.

The city walls of Dubrovnik are the second longest walls in the world, behind the Great Wall of China, and they circle the old town made famous by the filming of HBO’s Game of Thrones where it is featured as Kings Landing. It was also a location for Star Wars VIII. The city turns into a film set during August and September and you can see why if you trail through the Old Town before the tourists arrive around 8:30am. However, I am not going to make this post a Game of Thrones location tour – I’ll save that for a future post.

You can buy a three-day Dubrovnik Card for 225KM (about €30) that gives you access to a number of museums as well as the city walls rather than paying to get in each one (the walls alone cost €12) and I think we just about made it pay. One of the locations we probably wouldn’t have gone into without the pass was the Franciscan Monastery. The Cloisters are particularly pretty and around lunchtime you’ll get nice shadows being created on the furthest wall from the entrance. Be aware though that part of the Franciscan monastery is an old-fashioned pharmacy but, for some reason, photography has been banned. 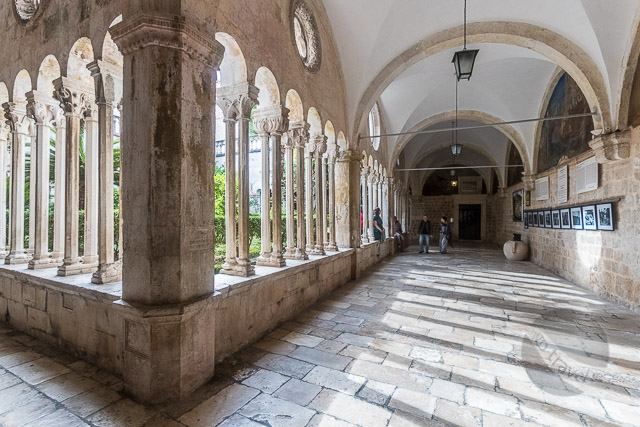 Another museum entrance included in the Dubrovnik pass is the Rector’s Palace which dates back to the 14th Century. The building has been damaged by earthquakes and fire several times so many of the artefacts included in the tour have been collected as a result of restoration following the various disasters. There is a fabulous collection of metal boxes with ornate locking mechanisms – again photography isn’t allowed in here (but sssh, you can get away with it if you are quick). Also, have a look at the fun handrails leading up the stairs – they live up to their name. 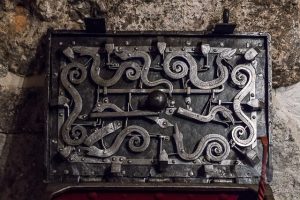 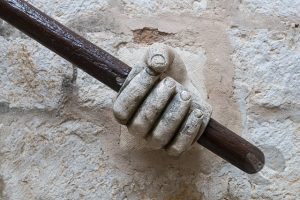 The final museum we visited as part of the 3-day Dubrovnik Card was The Museum of Modern Art Dubrovnik. The art collection is mainly from the 1930s to 1950s but is well worth a visit. The staircase at the entrance to the museum is particularly attractive if you like minimalism (as I do). The museum has used the motif throughout their advertising and it does make a nice clean photograph. There is also a roof-top terrace with sculpture and views to the old city. 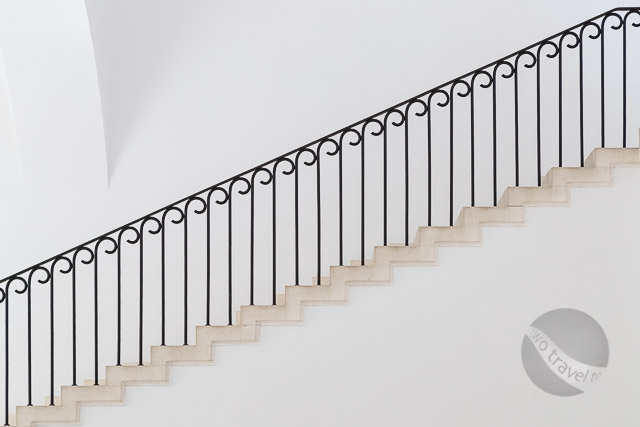 We were fortunate enough to get some decent weather in our short stay in Dubrovnik. During October the sun sets behind the Fort Lovrijenac so I found that the best shots were facing away from the setting sun and capturing the golden light hitting the fort (which GoT fans will know as the Red Keep). For sun rises, head around the Old Town to the beach in front of the Banje Beach Bar; there are some great rocks that you can use as foreground interest and in the background is another GoT location – the island of Lokrum that was used as the city of Qarth in season two. 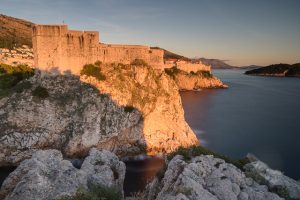 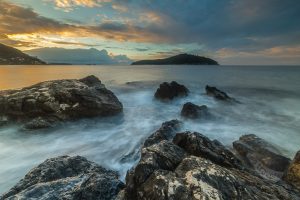 It is possible to get a blue hour view of the Old Town from the city walls but takes a bit of planning and some dodging of the guards as they close up the city walls for the evening. The ticket for the walls allows you to circumvent the old town once and there are three places where your ticket will be checked and once you have left a zone you can’t go back without paying again. This view was taken just before reaching the entrance at the Pile Gate so if you time your visit so that you end at this point as the sun is setting you should be able to capture the blue light before the man makes his way from the Sea Gate to check the walls are clear before they are closed. 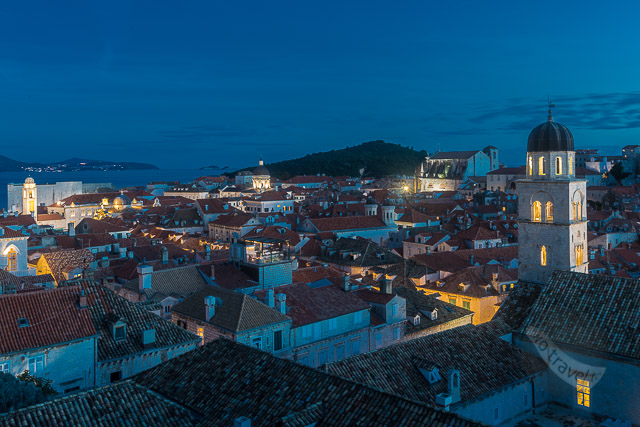 During our stay, it was International Cravat Day – who knew there was such a thing – and it is celebrated in Croatia due to the cravat being named after the ties that were originally worn by Croatian soldiers. If you go back to the Zagreb blog you’ll see them still wearing a red cravat today in their ceremonial uniforms. One of the statues in the old town was bedecked with a red cravat celebrating the international day. 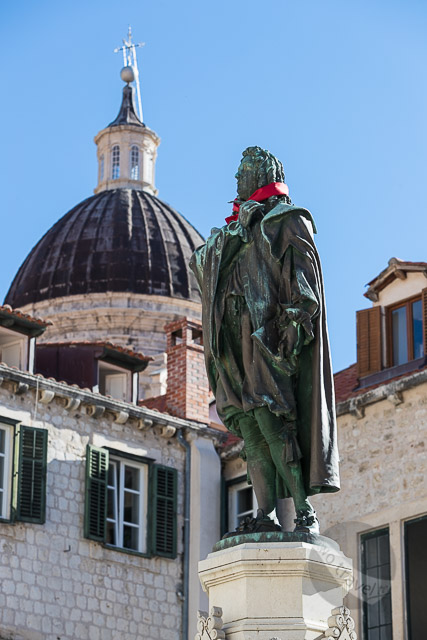 I’ll finish this post and our blogs of this tour with a few more Game of Thrones Locations. The steps (left) are in front of the Dubrovnik Natural History Museum, fans of the series will know it as the steps where Cersei Lannister undertook the Walk of Shame. The middle photograph is taken from under the steps leading to Fort Lovriljenac and gives a view known to fans as Blackwater Bay. The steps on the right are on St Dominika Street and are known for the Gold Cloaks scenes. 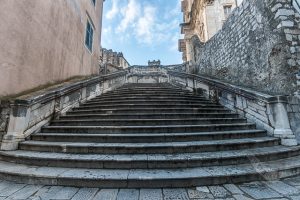 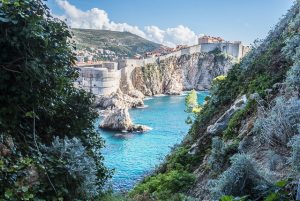 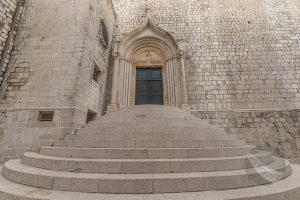 Not being a fan of Game of Thrones, it was easy for me not to be influenced by famous locations so I think I can be (in my mind) objective about the best location. I could have spent most mornings sitting on the rocks near Banje Beach bar and the view back over the harbour to the Old Town is almost as good the view the opposite way. 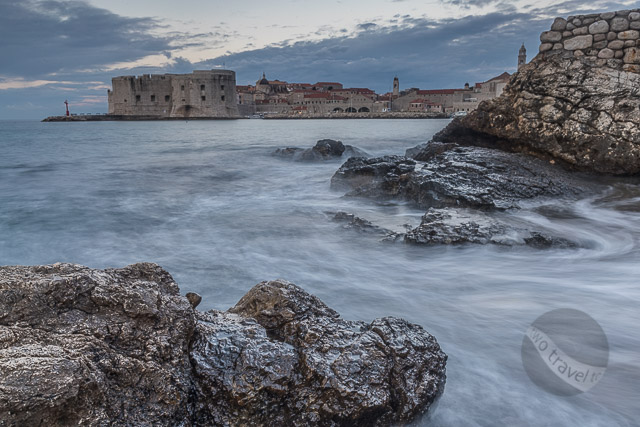