Our few days planned in Split turned into one day there (2 nights) with wee detours to Zadar and Trogir on our way to and from Split. All three seafront towns are attractive to tourists, day trippers and yachts.

In Split, we stayed just at the edge of the old town, in a compact, immaculate flat. I took an instant liking to this place for a few reasons – the paintings on the wall of Split, abstract but recognisable, and a private roof terrace one floor up, perfect for a quiet morning coffee or evening beer. On our last night we watched the International Space Station go past overhead from here. And lastly, the nearby 24-hour bakery. 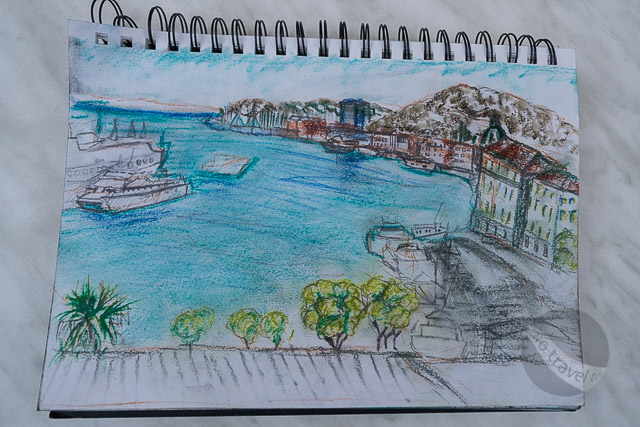 During the day in Split, I attempted some photography as well as a few very quick (unfinished) sketches. While Rich and another photographer posed the guards in the Peristyle square for photos, I watched the resident artist of this square, which was the focal point of Diocletian’s Palace, watch the two photographers as if he was checking out the competition with a newer technology for scenes of the square. It seemed fitting that he positioned himself beside the impressive and ancient Egyptian sphinx. 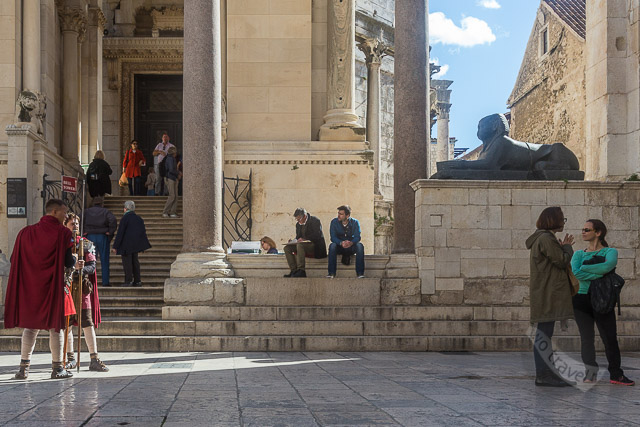 The highlight of Split for me was a surprise. We walked to the top of the Marijan hill park. Our route took us up the beautiful steep old street Senjska Ulica. The first two viewpoints over Split, the Adriatic and the surrounding Dinaric Alps from near Cafe Bar Vidilica were stunning and gave me a contrasting perspective from the AirBnB rooftop terrace. A bit further up and we were among the cypress trees that I’d been squinting at earlier in the day from across the bay. There are lots of terrace style walkways in the park lined with stone balustrades with lots of benches and large cacti. Quick sketches here were of the St Nicholas church near the start and the view away from Split from the top of Marjan Hill. To get to the top we walked many, many steps but there is also a small open top train-bus that runs up the other side. I could easily spend half a day here wandering and chilling. 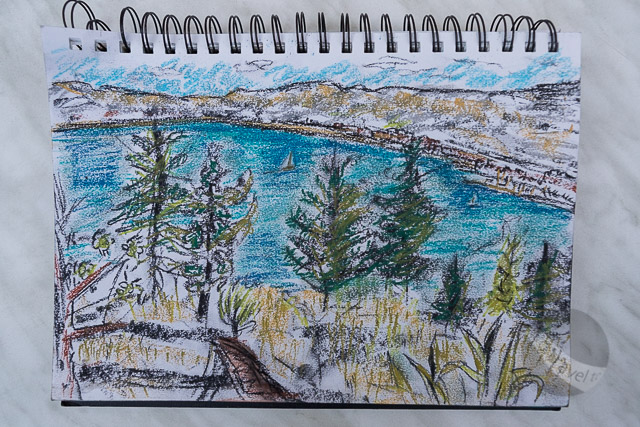 We also visited the nearby towns of Zadar and Trogir. Both places were bombed by allied forces during the Second World War, and historians still don’t agree as to whether this was because of their strategic usefulness to enemy Axis forces, or because of their cultural significance.  Having recently watched footage of Isis destroying material culture it was disquieting to think that Allied forces might also have deliberately targeted significant historical sites. In Trogir, we visited its only female Benedictine monastery where fragments of damaged stone sculptures are laid out around the cloister garden walls. While sketching the cloister I realised it was probably time to pay more attention to perspective, after drawing a wall going uphill and away from me!

In Zadar, the seafront destroyed during the Second World War and later replaced with a stark concrete walkway has been transformed by art installations designed by Nikola Basic. One is an aerophone Sea Organ, which takes the form of a series of stepped areas, under which pipes form chords that are played by the pressure of waves. Passing boats and their wakes in particular result in louder and more dramatic notes. The organ is one of only three in the world and there is nothing quite like hearing the sound and rhythms of the sea made into music. His nearby artwork The Greeting to the Sun puts the scale of the planets into context and uses photovoltaic energy to play coloured light sequences after dark. Once the sun sets this looks a lot like a very stylish outdoor dance floor.

The Roman ruins of the forum and also those near the Rector’s palace are worth a visit, even if just to watch the old men and women who come with whole loaves of bread to feed the birds. The Rector’s Palace itself, destroyed by a projectile missile in 1991, is currently being restored and will reopen as an exhibition and event venue according to information panels displayed on the construction hoardings. Zadar has been twinned with Dundee since 1959 but I don’t yet know any background to this.

Our trip to Split finished with a conversation with a woman who ran a jewellery stall in Diocletian’s Palace and had lived abroad in London previously for seven years. Her perspective on Split was that it was unique in being a living historical site, which she compared unfavourably to British historic palaces that are frozen in time and no longer have life going on in them. Interestingly she also advised us, not knowing our plans beyond Dubrovnik, to try and get to Bosnia & Herzegovina and Montenegro and to see three countries instead of lingering only in Dubrovnik. It’s easy to take advice when it coincides with what you’ve already decided to do! 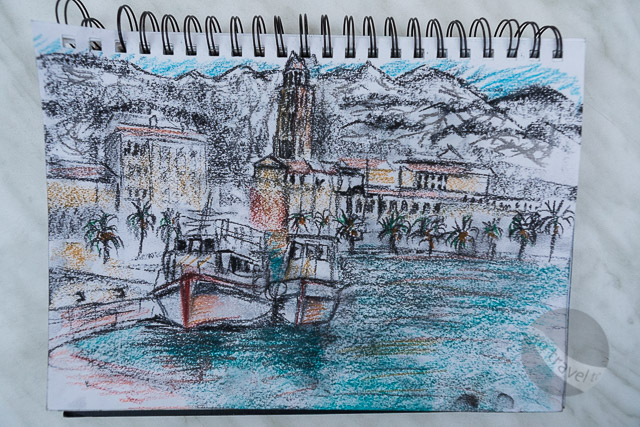